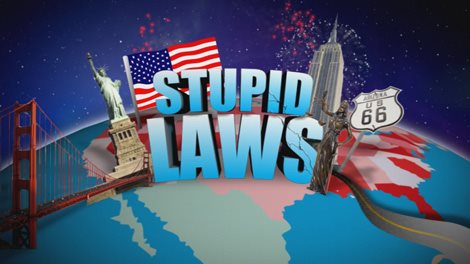 Dumb Laws
All laws do not begin as dumb laws. When all laws are drafted, they are made with a purpose. A law becomes dumb after it loses its purpose; this happens as time goes on. Many dumb laws are archaic laws that are no longer applicable to modern society. Laws do not have to be old to be dumb; a law will become stupid as a result of no longer having a purpose of interest to the community. In a utopia, for example, all laws are dumb because the protective force of the law would no longer be necessary.
Crazy Laws Weird Laws
Weird Laws in many states are still widely used today. Each state throughout the United States seems to tailor their laws to a specific group or situation. For example some states enforce weird laws that deal with fishing regulations, public interactions, people, and animals. Most weird laws still have a purpose in the justice system and often times help protect the community as a whole. Even if particular crimes do not occur often, the presence of these weird laws deters citizens from committing those crimes in the first place.
Funny Laws:
Funny laws are an international phenomenon. Funny laws typically regulate behaviors that are generally perceived as benign. Funny laws are laws that have illogical flow to their language. The grammar and language of legal text can be confusing to many and requires excellent skills of linguistic interpretation. Clearly defining the purpose or meaning of funny laws is a task that escapes some of the most skilled lawyers and legal scholars. Some funny laws have easily comprehensible language; however, their purpose may be somewhat of a mystery. Funny laws control behaviors that are absurd, leading someone to wonder the frequency of these disturbances that legislation had to be written to deter subsequent absurd actions.
Prohibition
The outlawing of liquor in the United States during the nineteen hundreds was a hasty decision on the government’s part. They attempted to rid the country of alcohol and ended up being unsuccessful. People still found ways to get alcohol and participate in social drinking. This was a period in history when almost everyone broke the law to drink. Many people thought this law was a stupid law because it was more detrimental to the economy than anything else in the United States. Once the government realized that alcohol production, sharing, and consumption was beneficial to the economy, they repealed the Constitutional Amendment, and allowed the legal use of alcohol in the United States.This amendment remains the only repealed amendment in history.
Blue Laws
Blue laws have contributed to a lot of other regulations and ordinances that exist in the United States and abroad. Many states throughout the United States still use blue laws today. The difference between the past and the present is that today religion is much more complex than it was in the 1800’s. This fact coupled with the progression of the human race has changed the scope of blue laws entirely. The move from religion, toward relaxation is prevalent in most areas across the country. Blue laws are used today as a means to achieve peace and clarity. The modern world is extremely busy compared to early life on the American colonies.
Strange Laws
Strange laws come as a result of cultural shifts in the way lives are lived. Law always reflects the needs of the majority of the community. Essentially, law’s purpose is to serve the greater good. Strange laws are often archaic laws that may seem alien to modern society. Many strange laws reflect attitudes unsavory to the modern palette. Strange laws often reflect previous attitudes towards women, sexuality, and animal cruelty. Many strange laws that remain on the books may seem out of context due to technological changes.
Silly Laws
There are silly laws in every state and they usually serve a unique purpose. For the most part, silly laws are used to protect the public from people that may potentially commit silly crimes. Many involve animals, profanity, indecent exposure, and the like. These silly crimes have the potential of being violated, and when they are, it is important that there are laws available to punish people by. Additionally, silly laws may be in place to protect a certain group or industry as well. Silly laws that have a religious base, were used a long time ago to protect certain religions, within a given state. In some of these states different religions have emerged, but the laws remain particular to earlier religions in order to protect their rights. As silly as laws may seem, often times they are necessary for either reference or direct use.
Curfew Laws
Curfew laws tend to be very controversial especially when it comes to dealing with juvenile delinquents. Every state has incorporated curfew laws in one way or another to regulate society. Some people believe they are used as a means to which the government gains control of  its citizens. Others understand the need for it, especially in emergency situations. Curfew laws differ from state to state, proving that every state reserves the right to make their own laws.Curfew laws are most effective when enforced at the local level because regulations can be more specific. However, curfew laws exist on all three levels of the justice system; local, state, and national.