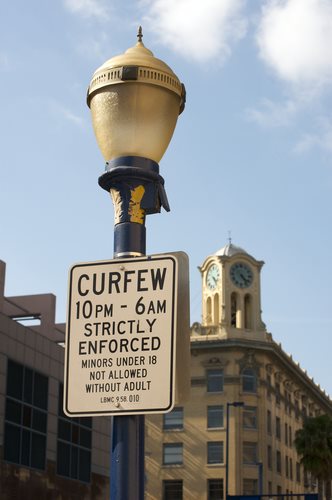 Curfew laws pertain to time limits placed on people. These time limits usually dictate to citizens of a given state or locale what amount of time they are allowed in public places.  These public places can be anything from street corners to actual businesses.
In Many instances curfew laws affect businesses as well. If a curfew is placed on citizens that do not allow them to be in a public place, and it happens to be a business, than usually that business has the same curfew. Most curfew laws make sense in this way, because if people are not allowed in a business, how is it supposed to grow and profit during that time? Often times these curfew laws work in the favor of businesses.
There are three categories in which curfew laws are established, juvenile, emergency, and business.
Curfew laws given to juveniles are usually enacted at the lower levels of government, being local or state. They pertain to children under the age of eighteen, and usually involve specific restrictions. Typically, juvenile curfews will restrict minors from a certain public area, or business. Time limits are given to ensure clarity of these laws.
The purpose of juvenile curfews is to ensure the safety of minors, as well as prevent crime, and regulate society. Keeping juvenile curfew laws at the local level make it easier to regulate issues from area to area. This is important because different areas have to focus on different issues. It is vital to the success of the law enforcement that these are relevant, hence the local enforcement. Often the restrictions given are legal before the given time, but require general stipulations after hours like;
The presence of a parent, guardian, or an adult over the age of twenty one.
Underage teens driving a motor vehicle.
School attendance or religious participation
The running of errands alone instead of with an adult.
Emergency situations.
Punishment for violating curfew when one is a juvenile differs from state to state and even locale to locale, however the basics include;
Monetary Fines that differ depending on the violation and the amount of times the law is broke.
Volunteer or community service work
Programs that must be attended after school, or enrollment in a school activity to distract a juvenile.
Restrictions and suspensions of driving permits or licenses.
Parent or guardian penalties.
In some states juvenile curfews are only given on a need basis. This means that local governments reserve the right to chose when these laws take effect. They can remain in effect all year or only during the summer or vacation months when kids are home most.
Most juvenile laws give state and local governments the authority to be as strict or as sympathetic as possible. This gives an officer the authority to help a kid out and slap them on the wrist,suggest parent and child counseling and alike.
Juvenile curfew laws have been fought due to different reasons that are circumstantial to each case. However, the most noted reasons that citizens fight juvenile curfew include;
When the law is too general for children and parents to understand fully.
A law that doesn’t allow parents to make their own decisions regarding their child. In this instance, most people fight that the government is interfering with their personal right to parent.
When racial profiling is at the base of law enforcement.
When traveling between states.
Emergency curfew laws are  enforced on all level of government, being local, state, and national. These curfew laws are enforced in response to a problem. These problems can include a local, state, or national crisis, natural disaster, or general disturbance that is continuous in nature. These can include;
Hurricane warnings that require citizens to remain indoors for safety.
After hurricanes so that cities and states can clean up quickly, and safely.
During revolutions and movements that get out of hand.
Many cities and towns create acts that give mayors, governors, presidents and other state officials the right to enact laws for a moment to protect the majority. For example during a terrorist attack, or a flu outbreak, a temporary law may be enacted. These emergency laws are usually only temporary and need based. Additionally, if crime, specifically killing sprees and mass murders are occurring in an area, an emergency curfew will be enforced. These laws are issued when people are in a state of panic and danger, and give officials control over sensitive situations.
Business curfew laws are those that require businesses to close during given hours. Many times they are required to close for the safety of the employees and the business itself. In areas where the crime rate is high, and the population is large and diverse, these laws become necessary. A time frame is usually given to these businesses so that during late hours, when crime is highest, people are not put in danger.
These laws usually apply to restaurants, drug stores, twenty four hour corner stores like seven eleven, or other places where loitering can cause danger. Giving curfews to a business can sometimes hurt profit for a business owner, but for the most part it protects it. The idea is that more money will be lost if an opportunity for theft and or crime presents itself, than if they close during earlier hours. Business curfew laws are not always enforced year round but on an as need basis.
Laws regarding curfews of all kinds can be found on national, state, and local websites. To aid citizens in better understanding why they exist, governments usually provide the actual PDF of the laws online. Citizens can read through the law and view amendments that have been written to change them. Additionally, schedules or enforcement, and or special circumstances are normally listed as well. If certain governments do not post these items online will provide the same information in their government offices. Curfew Laws are not always followed. However, they do serve a purpose to protect citizens and prevent crime.